The 3 Main Causes of Voice-Over Expansion in Video Translation

Over the past month we've been discussing text expansion in translation, one of the biggest hurdles to recording voice-over for videos, whether it’s off-screen narration or lip-sync dubbing. We'll finalize this discussion today by talking about the main causes of the text expansion itself. What is it about translation that leads to voiceover expansion? Why are translations often longer in terms of syllables than the English original?

This post will look at the three main causes of text expansion during translation.

Why text expansion is a problem for video translation

Any voiceover that goes with a video has time limitations. For example, a TV commercial in Spanish can’t be longer than the original English commercial – commercials have very strict time limitations of 15, 30 and 60 seconds. Likewise, if a corporate or e-Learning video is exactly 2:37 long, any VO for that video (that matches up to the visuals, animations, or even people speaking) will have to be exactly 2:37 long. Its internal sections will also have to be a certain length, so that they time properly with different video elements.

The translations of the audio script, however, will usually expand – that is to say, if the English is 100 characters long, the corresponding translation will usually be about 120 characters, or 20% longer. There are many reasons for this, and this expansion is not consistent across all languages, nor even for all translations – however, it’s a near-universal fact of translation. Moreover, character count isn’t even a reliable metric across languages, since double-byte languages express entire words or concepts with one character.

This expansion is a problem for VO that has time limitations, since text that is 20% longer will take approximately 20% longer to say – and again, all video VO has time limitations. Therefore, expansion must be dealt with as part of the voice over process, especially in the rare but crucial cases when text expansion is greater. We’ve seen expansion in Spanish voice-over scripts of over 200%, for example, which makes studio sessions impossible without cutting down on content.

For more information about this phenomenon, check out our introductory post Text Expansion in Foreign-language Voiceover.

There’s a common misconception that expansion occurs because some languages are “wordier” than others. This is generally tied to a parallel idea that English is a particularly concise language – so that therefore most translations of it will be longer, especially when going into Romance or European languages. This isn’t really the case – think of Julius Caesar’s famous line in Latin, and its English translation:

In this case, the English translation is much longer, by over 50%. Likewise, think of the way in which Spanish implies first-person pronouns, and also the way it treats direct objects, as in the following phrase:

I said hello to him.
Le saludé.

It’s not that target languages are always wordier than English, so much as that the translation process itself leads to expansion. Here’s how it does that.

1. Translation approximates the full semantic range of English (usually) in another language.

When a text is written in English, it is optimized for that language. It takes advantage of the concepts available in its specific social context, which includes jargon, cultural references, or turns of phrase. For example, an e-Learning scenario video might talk about “brain drain,” or “burning out.” These idiomatic expressions really only exist in English in the US – you may have issues replicating them in a British voice over, for example – and it takes many words to replicate these concepts in other languages.

The alternate is true, of course – think of compound German words like schadenfreude, which literally translates to “the pleasure derived by someone from another person's misfortune.” A translation of a German voice over script into English would have to deal with pretty drastic text expansion on words like this one. Same goes for Swedish voice over scripts – their translations into English can expand dramatically, in part because it also employs compound words and relies on very culturally-specific turns-of-phrase.

The key to remember is that the translation process itself causes expansion, since translators must replicate systems of thought in one language – which are streamlined for a particular culture and linguistic logic – into another language which does not have the same syntax or grammatical structure. It is impossible to replicate that text with the same economy of language – and thus, translations expand.

While the first cause can’t be completely eliminated, this second one can – and quite easily. Document translation has certain conventions that cause a huge amount of text expansion, and which don’t aren't necessary for VO. The best example is parentheticals.

Parenthetical translations take a term, usually a proper noun that is common in US English, and provide a translation in parentheses. For example, a translation of an FBI document may translate the agency’s name as “Federal Bureau of Investigation (Departamento Federal de Investigación)” – keeping the commonly used English-language name, but providing a translation in Spanish for context. Needless to say, this is good practice for documents, but causes issues for in the recording booth.

This can become an even bigger issue in non-Latin character languages, like Russian, in which translators provide not only the original English name, but also a transliteration as well as the translation. This 300% text expansion in a Russian voiceover script would wreak havoc in the studio.

Think of the phrase “US Customs is here to protect US citizens.” Using the acronym “US” as an adjective is something that only occurs in English, so that this phrase would be much longer in just about any language. For example, in Spanish it would be “La Aduana de los Estados Unidos existe para proteger a los ciudadanos estadounidenses.” Similar issue for a Dutch voiceover script, which would replace US with “Amerikaanse.”

This is an issue for soft skills as well – think of the term “HR,” which is commonly used in English for “Human Resources.” This acronym exists almost exclusively in English, however, so that it’s an issue whenever it appears in a VO script, as in the phrase: “To contact your HR rep, call the HR hotline, or visit the HR website and click on the Contact Us button.” This phrase could easily expand by 200% in most languages.

The best solution to these issues is to edit each VO script for timing – that is to say, to review the translations and edit them specifically to make sure that they’ll fit into the time allowed by the original English-language video. This will generally require shortening the translations drastically, making decisions about what’s acceptable to cut and what isn’t, or finding creative ways to say the same thing with fewer words. There are also ways to develop and edit videos so that they’re less susceptible to text expansion issues – we discuss them in our previous post, 3 Tips to Deal with VO Expansion in Video Translation. However, even just making translators aware of these issues, and asking them to keep text expansion to about 15%, goes a long way to ensuring that there won’t be issues in the recording booth. This simple precaution can keep video localization projects on time and on budget. 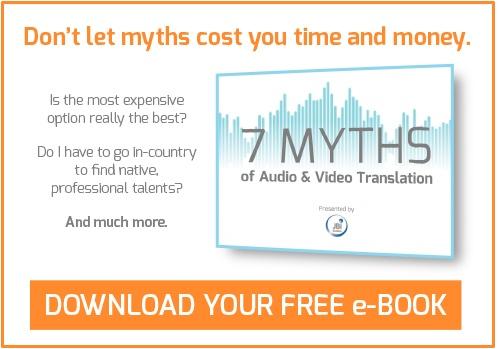