Be Prepared Before the Recording Session

Before going into the studio, directors should be well prepared so as to save time and headache during the production process. They should work with the project manager to understand the needs of the client, review the finalized script, and know the genre and the intended audience for the voice recording.

The voice-over tone for a TV war documentary will be drastically different than the voice-over tone for a Youtube children's animation. Knowing the tone of the content and its intended usage helps the voice director see the bigger picture in order to understand how to guide a voice talent's performance. If the client provides audio or video samples for reference, the director should review them thoroughly.

A director should also know if there are any time limitations to the voice recording. Certain lines in a foreign language script may need to be shortened or adapted to fit the time restrictions of a recording.

Directors should also study the guidelines provided on how to pronounce certain words, particularly acronyms or product-specific terms, the way the client desires. That way, directors are able to catch any mispronunciations from the actor and correct them quickly.

Part of a director's job is to make sure the recording process and environment is as stable as possible, enabling actors to create their best work, and that takes preparation.

Directors are the First Audience

Remember the first time you heard your own recorded voice? Sounded weird, didn't it? We sound different to ourselves than we do to others, which is another reason why directors can be invaluable. They offer a fresh set of ears to hear an actor's performance and can catch pronunciation issues and mistakes that the actor may miss.

Native-speaker directors in particular bring with them language fluency as well as cultural knowledge and understanding of the target audience. How a phrase, such as "I love you", is expressed in one language may take on a whole different connotation in another. It is the director's job to make sure that the intention of the source material is conveyed in the target language.

Directors act as the first audience to hear a voice actor's performance and offer feedback. If an actor is veering off course, directors can guide the talent back by giving examples or connecting the text to real life situations. A possible example could be, "Say this monologue as if speaking to a friend" or "This is the last time you will say goodbye, say it like you mean it." Great directors know how to contextualize what is being said and give specific examples that help the voice talent.

Intuition is key for directors. If there's something not right, directors should trust that feeling and give themselves a moment to articulate a clear, simple direction. Over-analysis is the bane to good directing and will confuse actors even more. It is better to keep directions simple, for instance, giving actionable verbs that an actor can follow such as: to teach, to defend, to hide, etc...

Respect Actors and their Craft

Actors are on the physical and emotional front lines of the recording process. They are the ones in the recording booth pouring themselves out into the microphone and will be the ones judged the most by listeners. It makes sense then, that many great voice directors have a background in voice acting. They understand the emotional and physical demands voice acting has on a talent and are generally more empathetic.

Great voice directors also collaborate with their talents. Instead of micromanaging every single line, directors give their actors space to create and play. More often than not, an actor may bring an idea the director didn't consider.

In the studio, the director decides how many takes are needed in order to capture the performance. For entertainment productions, directors should allow a take or two for the actor to explore her/his own interpretations, which sometimes leads to some surprising results.

If actors appear nervous, directors should find ways to calm them, maybe joke with them to lighten the mood. An actor can get claustrophobic and lonely in the recording booth; directors should let them know they're in the trenches with them and are there for support.

When an actor is performing a line that may be off, directors shouldn't interrupt them mid-sentence. Directors should let actors finish their line before giving notes. In this way, actors feel more comfortable performing in front of the director. If there's a constant threat that the director is about to interrupt, actors will get anxious and the performance will suffer.

If you're the director, the main thing is to show your actors respect. Through careful casting, actors have been hired on as creative collaborators that bring their own voice to the project. Remind yourself to put yourself in their shoes and to treat them the way you would want to be treated.

Don't Forget the Most Important Thing...

To summarize, the key things to directing voice talent are: be prepared, know your audience and desired product, respect the actors, and most importantly...have fun! In an industry with strict deadlines, client demands, and intense competition, it's easy to forget to have fun, to play. Voice directors and actors should remind themselves why they first decided to pursue this career. Many times, it was not for the fame or the money, but for the joy of the process. That thrill when delivering an emotional line or that feeling of camaraderie working with a production team, these are some of the beautiful things about voice acting and directing that we should not forget.

Planning to direct your own voice-over/dubbing project soon? Below are some key terms to know make sure that you're project goes smoothly: 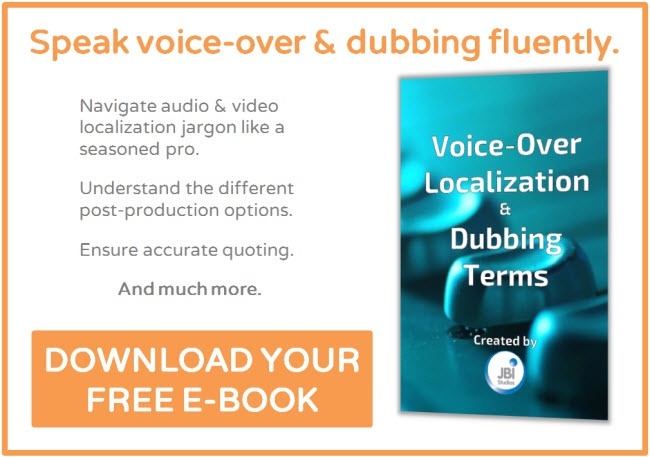