Christmas Around the World

Hope you had a Merry Christmas and Happy Holidays! As a localization studio, we here at JBI Studios work with many different languages for clients from all around the world. We understand that knowing a little bit about other cultures goes a long way with making connections and creating strong professional relationships.

In this blog we will have some fun and explore how Christmas is celebrated around the world. Understanding the local holiday traditions of different countries during this time of year is helpful for localizing your content for the holiday season.

Let's get on Santa's sleigh and let the reindeer (sometimes switched out for kangaroo in Australia) take us away!

Scandinavia: In pre-Christian Scandinavia, which includes present-day Sweden, Denmark, and Norway, Scandinavians celebrated the return of the sun on the winter solstice, December 21st. Large logs were brought home and set on fire and families would feast until the logs burned out which could take up to 12 days; the burning of the Christmas yule log comes from this tradition.

In Sweden, Swedes have their main Christmas meal on Christmas Eve, a feast known as julbord that translates literally to "Christmas table". A typical julbord will have julskinka (Christmas ham), dopp i grytan (meat broth used for dipping bread), and lutfisk (preserved cod). Another Swedish Christmas Eve tradition is watching Donald Duck! Every Christmas Eve since 1959 at 3 p.m, Sweden's main public TV station screens Kalle Anka och hans vänner önskar God Jul (Donald Duck and His Friends Wish You a Merry Christmas). The Swedish dubbed, one hour Christmas special was, for many years, the only time that Swedes could watch American cartoons on television. Kalle Anka (Donald Duck) show has become so popular that Swedish cell phone usage drops by 28% during the hour presentation, a dip in usage that doesn't appear on any other day in the year.

France starts its Christmas celebrations early with the Advent calendar: a calendar with an illustration and a small gift, usually a chocolate, for each day from December 1st to December 24th. Advent calendars are not limited to chocolates, some calendars hold beauty products (perfume, lotion, etc...), specialty teas, and many other kinds of small surprises.

In France, Santa Claus is called Père Noël (Father Christmas) and in eastern France, Père Noël's companion is a bearded, black robed, disheveled looking man called Le Père Fouettard (Father Whipper). As his name suggests, Le Père Fouettard punishes naughty children with his whip, though this role has been downplayed in more recent times for a more gentler version and has appeared as a character in animated films.

Christmas is Hot in Australia

This time of year is summer in Australia and it can get incredibly hot. As a result many Australian firefighters and volunteers work through the holidays fighting fires, this year being one of the worst bush fires in history.

Australians decorate their homes with Christmas trees but you can also find them putting up "Christmas Bushes", a native Australian tree that has flowers which turn red during the Christmas week. A popular Australian event held in most towns with a population over 2,000 is "Carols By Candlelight" which families gather together at a public venue to sing Christmas carols together. They may also attend a concert to hear carols sung by their favorite singers, the largest concert being "Carols in the Domain" in Sydney.

Philippines is the only Christian country in Asia and is known to have the longest Christmas season in the world, held throughout the "Ber" months of September, October, November, and December. The season is filled with parades, concerts, and festivals like the Giant Lantern Festival (in Tagalog: Ligligan Parul Sampernandu).

Held the Saturday before Christmas Eve each year in the city of San Fernando, eleven villages (barangays) each compete by creating elaborate lanterns made of various material that can be 6 meters in diameter and are lit by electric light bulbs. The tradition started in the year 1904 and has earned San Fernando the title of Christmas capital of the Philippines.

As you can see, the holiday season is important to many different countries around the world, each with their own local traditions and ways of celebration. Understanding the customs of each region helps localization studios, such as JBI Studios, translate and localize content for each area. If you want to localize your holiday content for another country, you will have to be sure to adapt it so that the audiences there can appreciate it. Who knows, it might become as popular as the Swedish Donald Duck.

Want to localize your content for the holiday season? Be sure not miss anything by downloading our free checklist below: 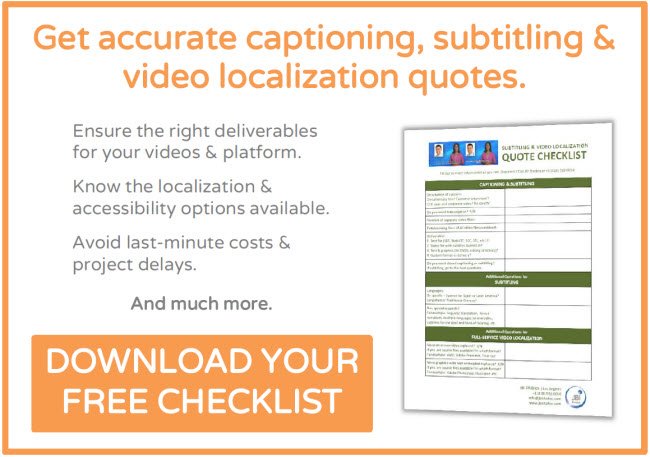